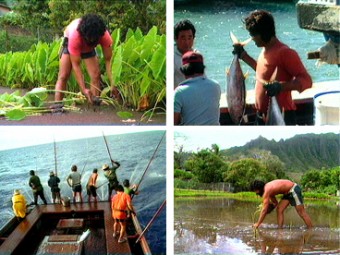 Fisherman Kaiana Ahmad takes us out on an aku (tuna) boat for a day of deep-sea fishing and Keoki Fukumitsu shares his life as a taro grower in Hakipu‘u on the island of O‘ahu.

Kaiana shows how sea birds help fishermen find schools of fish and demonstrates the use of fishhooks and lures. We travel with him and the aku boat crew to Waimea bay to capture bait fish.

Born to a family well known in the windward district for their bountiful lo‘i (taro gardens) and ready supply of poi, Keoki struggles to continue the tradition while dealing with such modern-day problems as low stream flow, water pollution and introduced pests.

Originally produced for the school children of Hawai‘i.