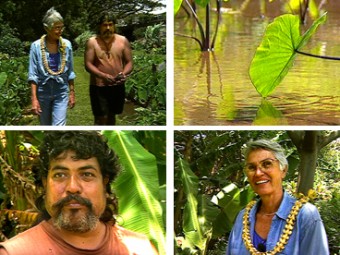 Charles Kupa escorts Marion Kelly on a tour of Ka Papa Lo‘i ‘o Kānewai, the kalo (taro) gardens on the grounds of the Kamakakūokalani Center for Hawaiian Studies at the University of Hawai‘i at Mānoa.

Charles points out the kalo varieties grown in the lo‘i and demonstrates the workings of the dam and ‘auwai system that directs stream water into and out of the lo‘i.

Recorded on May 14, 1990 as part of the feature documentary Ahupua‘a, Fishponds and Lo‘i, produced by Nalani Minton and directed by Nā Maka o ka ‘Āina.