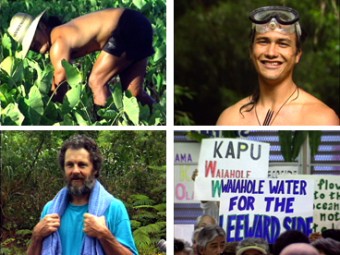 This program explores the issues surrounding the allocation of water that flows in the Waiāhole Ditch on the island of O‘ahu. The title comes from an old saying referring to the stubbornness of the people of Waiāhole valley. This program documents their determination to regain the water that was taken from windward streams in the early 1900's to irrigate sugar plantations on the drier leeward side.

Stream ecosystems are seen close up during a visit to Waiāhole stream with two young Hawaiians who discover ‘ōpae, a native shrimp. The special qualities of the ‘o‘opu (goby) are studied by aquatic biologists at Hakalau stream on Hawai‘i island, while ocean fishermen describe the important connection between the health of the streams and that of the surrounding coastal areas.

The link between water and the cultivation of taro, the staple food of Native Hawaiians, is brought out through a historical look at what happened to the windward valleys, streams and communities in 1916 when the Waiāhole Ditch first began to transport water to leeward sugar plantations. Today’s taro growers call for returning the water so that the extensive agricultural systems developed by earlier Hawaiians can once again produce food for local residents.

But developers want the ditch water for golf courses and commercial and resort development. Issues such as limits to growth, sewage recycling and preserving family-based agriculture are addressed by community members and public officials alike.

Native Hawaiian tradition regarding the use of water are presented as a background to understanding contemporary law and recent court rulings.