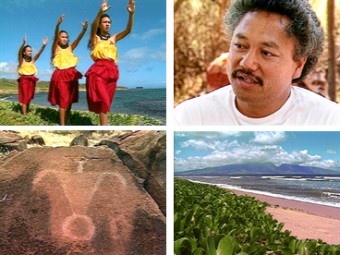 Sol Kahoohalahala takes a group of Hawaiian Studies teachers on a tour of his beloved island of Lāna‘i. From the ancient archaeological sites at Kaunolū to the Garden of the Gods and Lāna‘i Hale, the highest elevation on the island, Sol gives a living history of the island and its people.

Sol also visits dryland forest protection areas to show how rare and endangered plant species are being preserved and propagated.

Joining Sol for this island tour is Elaine Kaopuiki, a kumu hula (hula master), who shares her memories of earlier times at the beach areas of Lōpā and Keōmuku. Also appearing are Sol’s three daughters who perform a hula to his chant of love for the island.