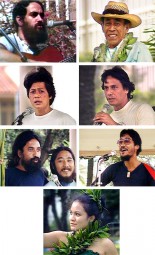 Compilation of archival footage from the late 1970’s and early 1980’s documenting the movement to protect the island of Kaho‘olawe. With its success in seeing U.S. military bombing stopped in 1990, the Protect Kaho‘olawe ‘Ohana has been widely recognized as a catalyst for other struggles to protect important places in Hawai‘i and as the spark that lit a resurgence of Aloha ‘Āina (love for the land) activism that continues today.

Digitally remastered and archived in 2011 by Nā Maka o ka ‘Āina with support from Hawai‘i People’s Fund. Proceeds from sales will go toward digitizing/remastering the Kaho‘olawe Video Archive PHASES 2 – 5.

On March 6, 1982, five years after the disappearance of George Helm and Kimo Mitchell in the seas off the island of Kaho‘olawe, the Protect Kaho‘olawe ‘Ohana held a tribute to the two men at ‘Iolani Palace in Honolulu.

Representatives from the Helm and Mitchell families along with community members, singers and musicians from Kaua‘i, Maui, Moloka‘i and Hawai‘i island joined their O‘ahu compatriots in remembering the legacy of George and Kimo and the actions of many others who worked peaceably to stop the U.S. military bombing of Kaho‘olawe.


Disk 5
RIMPAC ‘82
Produced by Nā Maka o ka ‘Āina in 1982, this program is a compilation of footage and photos dealing with the Protect Kaho‘olawe ‘Ohana’s 1982 campaign to stop RIMPAC — Rim of the Pacific military exercises, part of which included the bombing of Kaho‘olawe island.

Speeches and musical presentations from the March 6, 1982 Tribute to George Helm and Kimo Mitchell at ‘Iolani Palace are intercut with footage of Protect Kahoʻolawe ‘Ohana activities, news coverage of demonstrations and photos/narration from the PKO’s educational slideshow, narrated by Luana Busby.


Kaho‘olawe Aloha ‘Āina – George Helm (1977)
Produced by Ken Yasso in 1977 for the Protect Kaho‘olawe ‘Ohana, this program features scenes from the last years of the life of George Jarrett Helm, Jr. as he worked tirelessly to stop the bombing of Kaho‘olawe and inspire others to take up the cause of Aloha ‘Āina (love and protection of the land). Video of his classroom presentations, musical performances, speeches and interactions with government are supplemented with news stories and location shots of early occupations of Kaho‘olawe. Video footage by Kevin Coates, Stephen Morse, Sherman Napoleon, Jr., KGMB, Pau Hana Years and Videololo II. Edited by Ken Yasso and Joan Lander.