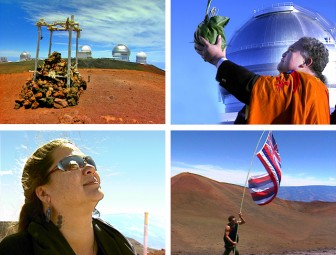 Although the mountain volcano Mauna Kea last erupted around 4000 years ago, it is still hot today, the center of a burning controversy over whether its summit should be used for astronomical observatories or preserved as a cultural landscape sacred to the Hawaiian people.

For five years Nā Maka o ka ‘Āina captured on video the seasonal moods of Mauna Kea's unique 14,000-foot summit environment, the richly varied ecosystems that extend from sea level to alpine zone, the legends and stories that reveal the mountain's geologic and cultural history, and the political turbulence surrounding efforts to protect the most significant temple in the islands, the mountain itself.

Mauna Kea - Temple Under Siege paints a portrait of a mountain that has become a symbol of the Hawaiian struggle for physical, cultural and political survival. The program explores conflicting forces as they play themselves out in a contemporary island society where cultures collide daily.

In an effort to find commonalities among indigenous people elsewhere regarding sacred mountains, the documentary visits Apache elders of Arizona who face the reality of telescope development on their revered mountain, Dzil Nchaa Si An, known as Mt. Graham.